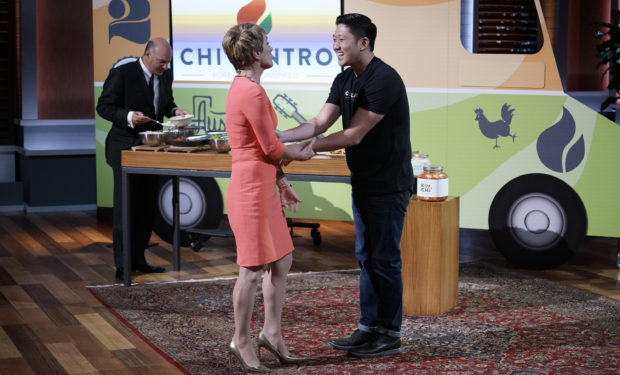 Jae Kim of Austin, Texas rolled out his first Chi’lantro BBQ food truck in 2010. He offera a fusion of Korean kimchi and Mexican cilantro dishes. His best-seller is Kimchi Fries, traditional french fries covered with caramelized kimchi, cheese, onions, cilantro, and sriracha, among other ingredients including a “magic sauce.” After seven years in business, and with a number of brick and mortar restaurants in the Austin area, Kim wants to expand his business nationally. That’s why he pitched Chi’lantro BBQ on Shark Tank in November 2016. Barbara Corcoran and Kevin O’Leary invested $600,000 in exchange for 20 percent equity in Chi’lantro BBQ. [Related: 33 Favorite Shark Tank Gifts — New List]

Since Shark Tank, guest shark Chris Sacca admitted that he regrets not investing in Chi’lantro. After stuffing himself with some kimchi fries served up by Chi’lantro at SXSW, Sacca said he didn’t invest because he doesn’t know a lot about the food business. But now, “I really regret not doing that deal,” said Sacca who described himself as “fat and happy” after eating Chi’lantro. See video below. Shark Tank airs Fridays at 9pm on ABC.