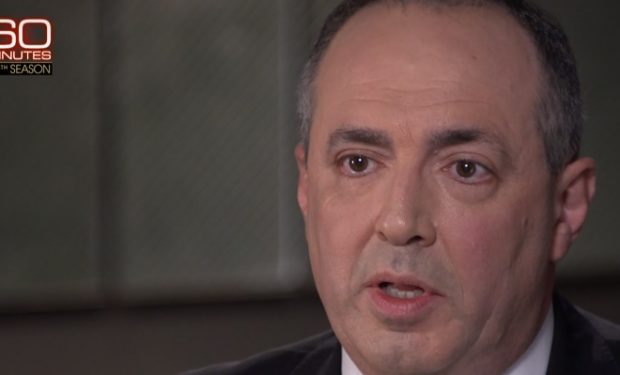 60 Minutes teams up with The Washington Post to investigate the pain killer opioid abuse crisis in America. Their six-month investigation included an interview with the highest-ranking DEA agent ever to turn whistleblower, former Deputy Assistant Administrator Joe Rannazzisi. The retired agent says the DEA’s efforts to stop the opioid epidemic has been “derailed.”

Rannazzisi doesn’t just have a law degree, he also has a pharmacy degree and as Bill Whitaker says, “he has a smoldering rage at the unrelenting death toll from opioids.” Rannazzisi accuses the distributors (multi-billion-dollar pharmaceutical companies) of “fueling the opioid epidemic by turning a blind eye to pain pills being diverted to illicit use.” And he says the largest distributors are Cardinal Health (Dublin, Ohio), McKesson (San Francisco), and AmerisourceBergen (Chesterbrook, PA). “They control probably 85 or 90 percent of the drugs going down stream,” says Rannazzisi. The 60 Minutes double-length segment will air on Sunday, October 15 at 7:30pm on CBS.