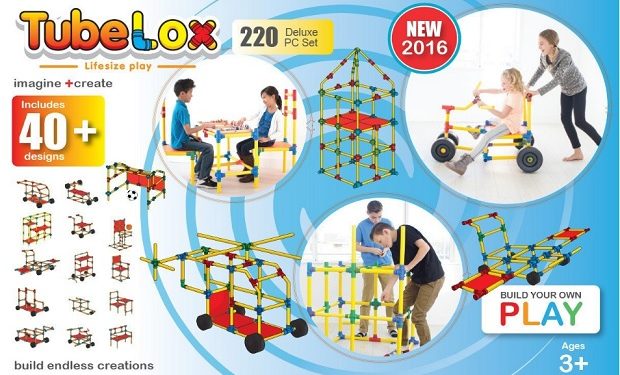 On The Toy Box, host Eric Stonestreet will invite husband and wife entrepreneurial team Rachel and Steve McMurtrey from Pleasant Grove, Utah onto the show. They’ll get the chance to demonstrate their toy invention, TubeLox, in front of the kid judges. TubeLox is a life-sized construction toy that allows kids to design and build sizeable structures, usable cars, homes and rocket ships, among other things. Judge Noah, 7, is super excited about the idea of driving his own car (made out of Tubelox) to school every day.

TubeLox has a very good chance of making it to the finals. The only thing that might get in their way is the price point. Note: The Toy Box isn’t the McMurtreys’ first time on prime-time television. They pitched their $350 kids play structure Jungle JumpaRoo on Shark Tank in 2014 (they did not get a deal). The Toy Box airs Fridays at 8pm on ABC, right before Shark Tank.

[Left: Jungle JumpaRoo, an earlier invention, is $350 at Amazon]