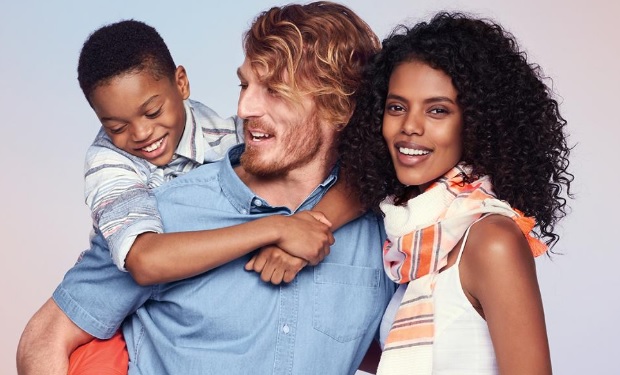 Old Navy used a depiction of an interracial family — a white man and a black woman with a child — to celebrate what it calls its “Thank You Event.” Despite this being the year 2016, this depiction upset some people, who complained that Old Navy shouldn’t be promoting interracial relationships. (They must think the company really is like the old navy.)

But despite the haters, Old Navy won a bunch of fans with the ad — and lots of mixed race families chimed in with photos of themselves. (Just the way the ad agency dreamed they would.) One of those chimers was Jack McCain, who knows something about the Navy — he’s a helicopter pilot in the actual US Navy. (The same US Navy his father, Senator John McCain, honorably served in.) Jack is part of an interracial marriage: his wife is Air Force Officer Renee Swift McCain. They’re pictured below. McCain gets right to what the haters need to do: “Eat it,” he says. Below that post is another of a man and his family expressing the same thing: he’s just doing it with a satisfied, happy smile instead of saying “eat it.” Note: We’re pretty sure racists don’t get the 30% off either.

To the people upset about the #OldNavy “Scandal” of an a picture of a mixed race marriage, eat it. @Reneeitchka pic.twitter.com/yA5YwbZRcm

S/O to @OldNavy for not caring about the haters and proudly showing love! Thanks for the idea @kharyp pic.twitter.com/bdhby2bd3V