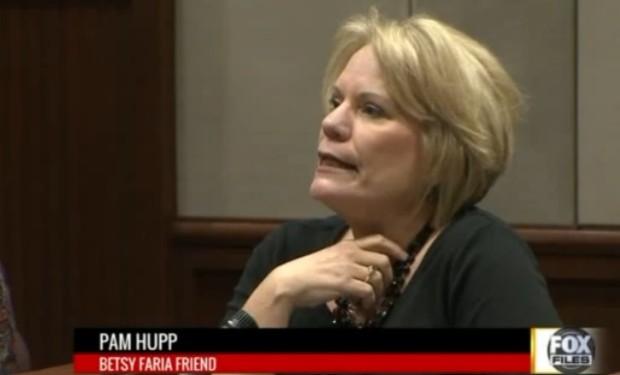 Betsy Faria was found stabbed to death in her home in 2011. Her husband Russell Faria found her – with the knife still lodged in her neck – and  called 911. Although he had an “iron clad” alibi, Russell Faria was found guilty of murdering his wife. In 2015 he was granted a retrial and was found not guilty. Three days before Betsy’s death, she changed the beneficiary of her $150,000 life insurance policy from her husband to her friend Pamela Hupp, who collected the money. Hupp told police that Betsy had asked her to “make sure my kids get it when they need it.”

Now Betsy Faria’s two daughters have brought a fraud claim against Hupp. The daughters claim Hupp spent the money which was supposed to go to them. Hupp responded with sarcasm to the accusation. “I used that money to buy a house on the Troy Courthouse steps,” Hupp said in court. Court records show that Hupp did set up a revocable trust for the daughters one week before Russ Faria’s first trial. Her own lawyer says she’s not a credible witness. She revoked the trust a couple of weeks after he was found guilty of killing Betsy. Dateline NBC will feature Faria’s second trial on January 22 at 9pm.