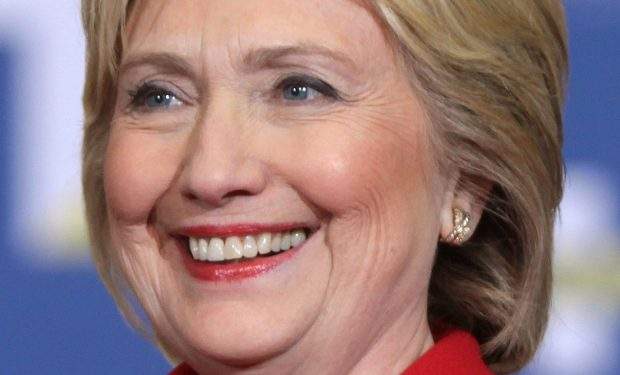 “Doting grandmother, among other things” Hillary Clinton — the quote is the former Secretary of State’s tongue-in-cheek Instagram tagline — is busy promoting women’s voices on social media — and using the power of art to do it.

Earlier this week, Clinton joined an art-driven show of solidarity against the Iran government’s crackdown on women’s freedoms, which have triggered broad protests in the Middle Eastern nation.

“I was honored yesterday to help launch a campaign,” Clinton wrote, “called ‘Eyes on Iran’ – a multimedia art activation in the shadow of the United Nations to make sure the public does not forget or ignore the brutal crackdown on Iranian women and girls.⁣”

Clinton’s very next Instagram post focuses on the art of Shin-hee Chin, a Korean-American artist and Professor of Visual Art at Tabor College in Kansas. Chin’s fiber/mixed media work has been featured in galleries and museums around the world including Washington DC, Tokyo, Hampton, Geneva, Tainan, and Seoul.

The Clinton Foundation is now featuring Chin’s work along with that of 15 other artists as part of the “Women’s Voices, Women’s Votes, Women’s Rights” exhibition for the international summit it’s hosting on December 2. The summit vows to explore “the unfinished business of the 21st century — women’s rights.”

Chin describes her unique position as a bi-cultural artist this way: “Cultural context has most shaped my work as I have spent half my life in South Korea and the past two decades in the United States. I have had equal exposure to two vastly different cultures. In my years dealing with issues of a bi-cultural lifestyle, art has helped me reconcile the conflicting nature of these influences.”