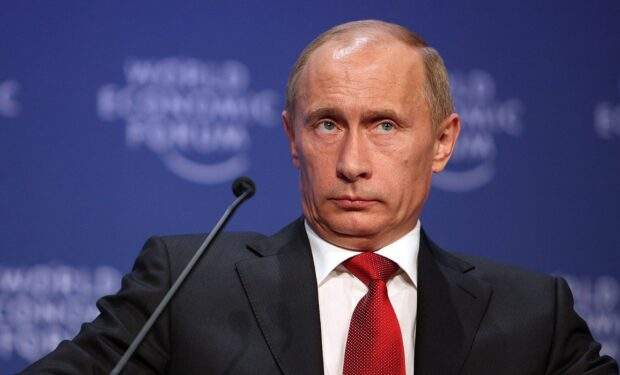 Vladimir Putin appeared at a benefit show in Moscow in 2010, where myriad big Hollywood names in attendance had to listen to him sing “Blueberry Hill” — that most American of songs that Richie Cunningham (Ron Howard) made even more iconic in 1970s sitcom Happy Days. Howard’s character frequently dialed up “Blueberry Hill” to express his post-war era exuberance, innocence, and teenage joy.

In Putin’s case, the tune originally made popular by Gene Autry and Fats Domino turns out to be pre-war and though the Russian leader looks joyful, no one could say he looks innocent.

Familiar faces like Goldie Hawn, Kurt Russell, Sharon Stone and Kevin Costner are startling to see, and the comments, given Putin’s recent actions in Ukraine, show that viewers are disturbed anew by the video.

(According to a detailed Guardian report, the celebs in attendance didn’t know they’d be seeing/hearing Putin. The Hollywood group had “been booked to appear by Samuel Aroutiounian, a New Yorker who specialized in bringing Hollywood talent to Russia and later said that he had been unaware Putin would be appearing,” the Guardian reported.”)