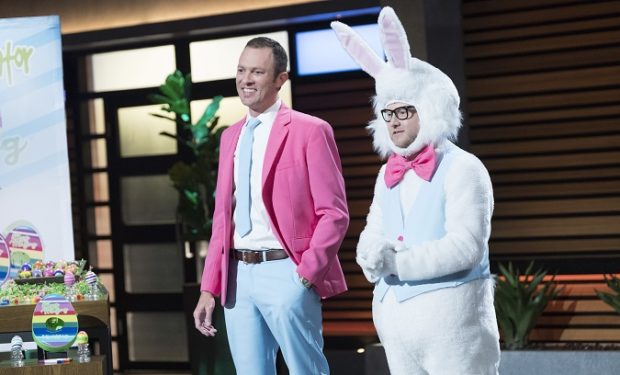 Eggmazing Egg Decorator is an egg decorating kit that eliminates the stink and mess of traditional Easter egg decorating. It doesn’t use vinegar or dyes. Instead, you put a hard-boiled egg on a batter-operated “nest” which spins the egg while the user decorates the egg with a marker.

The two entrepreneurs behind the fun product, Curtis McGill and Scott Houdashell, pitched their business on Season 9 of Shark Tank.

They went into the Tank seeking an investment of $350,000 in “egg-change” for 7 percent “egg-quity.” After receiving a number of offers, they ultimately accepted Lori Greiner’s offer: $350,000 for 10 percent plus a $2 royalty on each until she’s paid back.

Since Shark Tank, the company has expanded its product line to include the TreeMendous Christmas Tree Ornament Decorating Kit and new the DinoMazing Egg Decorating Kit (see left) which includes “2 Dino Eggs with Mystery Dinosaur in Each Egg.” They’re also available at Walmart.

And Lori is doing her part by selling the kits on QVC, see photo below.