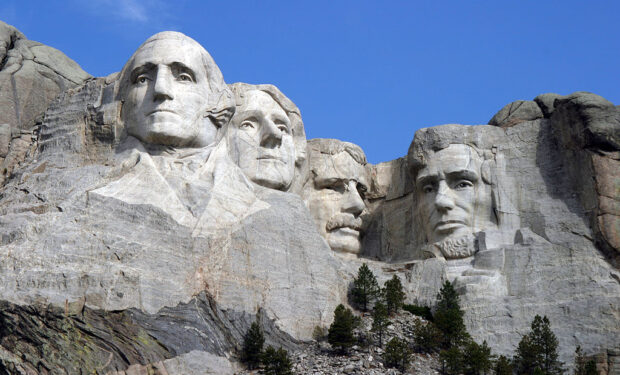 But recent protests and emerging consciousness in America about systemic racism have altered the perception in many ways about these illustrious presidents and their histories.

Indeed, all four of the men featured on Mt. Rushmore have recently had their likenesses removed from various places across the country.

It’s not that they’ve all been discredited. Abraham Lincoln‘s image has hardly been compromised, for example, by recent events.

However, various depictions of Lincoln as a savior, especially one statue in Boston with a freed slave kneeling at Lincoln’s feet, are now seen as representing regrettable scenarios because the imagery “feeds into a narrative that Black people need to be led and freed,” according to Boston artist Tony Bullock. The statue is bring removed.

In New York City, a statue of Theodore Roosevelt on a horse that long stood at the entrance to the Museum of Natural History similarly showed a Native American man and an African man at Roosevelt’s side in what is now commonly perceived by many to be a racially discriminatory position. That statue is also slated for removal.

As for Washington and Jefferson, the plights of their respective reputations is less ambiguous: both the first and third president owned slaves. Jefferson famously fathered children with his slave, Sally Hemings.

In Portland, Oregon, a George Washington stature was torn down and left to lie in the street by protesters.