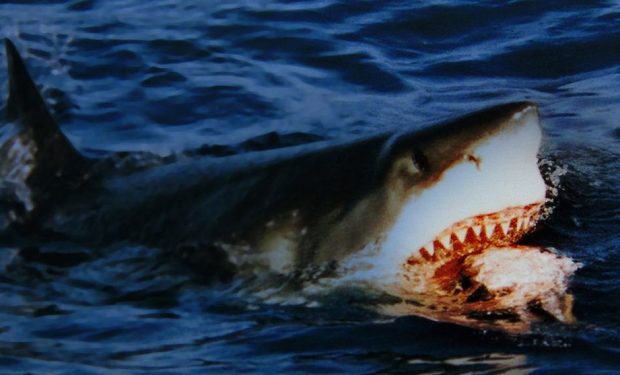 “Jaws does exist,” says Gregory Long as he posted video of a massive shark reportedly shot off the Massachusetts island of Martha’s Vineyard. It’s not just the resemblance of this shark to Steven Spielberg‘s famous nightmare that makes this video intriguing for people, but it’s also — as they say in real estate — location, location, location.

Yup, Martha’s Vineyard is where the legendary Jaws was filmed. The movie essentially created the idea of the summer blockbuster, but it’s even more famous for taking a subject — shark attacks — and moving it way up the list of common fears.

But that’s about where the shark resemblance ends — because experts have debunked the notion that this formidable creature caught on video is a Great White. The Atlantic White Shark Conservancy says instead that it’s a Basking Shark, which is decidedly not the model for Spielberg’s thriller.

NOTE: The Atlantic White Shark Conservancy does share news of actual White Sharks off the Massachusetts coast this summer. So if the first video doesn’t alarm swimmers, perhaps this much blurrier evidence will raise the worry radar:

Long estimates the shark captured on the video he posted to be 25-30 feet in length and approximately 5,000 pounds. This shark, however, did not get close to the American Legion Memorial Bridge, a famous spot in the film, which is now known as the “Jaws Bridge.” The movie is so famous that the site is now a tourist attraction. See below.