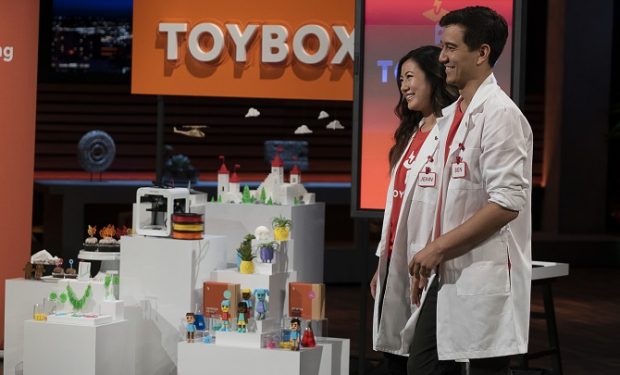 Toybox is an easy-to-use, one-touch 3D printer for kids to design and print their own toys. It’s tagline is: The last toy you ever need to buy. The Toybox is just nine inches tall, weighs 6 lbs. and no adult assistance is needed. You just plug it in, connect to Wi-Fi, load the printer food and then print. The founders of Toybox Labs — Jenn Chin and Ben Baltes from Oakland, California — raised more than $155,000 on Indiegogo to turn their prototype into a mass-produced product. Now Chin and Baltes are looking for more money on Shark Tank on Sunday, March 10.

Prior to founding Toybox Labs with Chin, Baltes (a University of Texas at Austin computer science graduate) was a software engineer for Microsoft where he worked on Windows, Out of Box Experience (OOBE, pronounced oo-bee). OOBE is the experience a consumer has when preparing to first use a new product, i.e., when they take the product out of the box and install or configure a piece of hardware of software on a computer.

The Toybox Starter Bundle includes the printer, one reel of coconut (white) print food, one EZ-Peel Bed, a catalog of cool digital toys to make with the printer, and free Creator Space access. It used to be $399 – it’s now on sale for $299. New episodes of Shark Tank air Sundays at 10 pm on ABC, right after American Idol. [Related: 27 Favorite ‘Shark Tank’ Products at Amazon — New List]