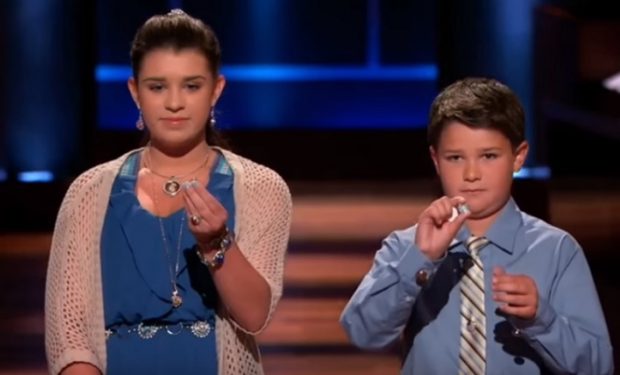 Shelby and Gordy of Yourself Expression on Shark Tank (ABC)

Yourself Expression was a jewelry line with interchangeable accessories that “snapped” or “popped” into place. 15-year-old Shelby Gogulski and her 10-year-old brother Gordy pitched their successful jewelry business ($1,000/a day!) on Shark Tank in May 2016. They went into the Tank seeking an investment of $50,000 in exchange for 20 percent equity but, alas, they “mistakenly” (their word) didn’t get a deal.

[Snap Jewelry on sale at Amazon]

After Shark Tank, Yourself Expression re-branded itself as Gracie Roze. The snap jewelry collection has expanded to include Gracie Coins and Angel Lockets, and a girl’s clothing line (see photo below). Gracie Snaps and Gracie Coins are now available for sale in stores on various cruise ships including Carnival Cruise Lines and Norwegian (that’s about 400 retail stores). Gracie Roze also opened a retail store in Jacksonville, Florida. New episodes of Shark Tank (Season 10, 2018) air Sundays at 9 pm on ABC. [27 Favorite ‘Shark Tank’ Products at Amazon]

Having a great day at the parks. #createwearchange #souvenir #sharktank #disneyparks

One of our 3 piece girls outfits for just $34. Perfect for summer or winter.