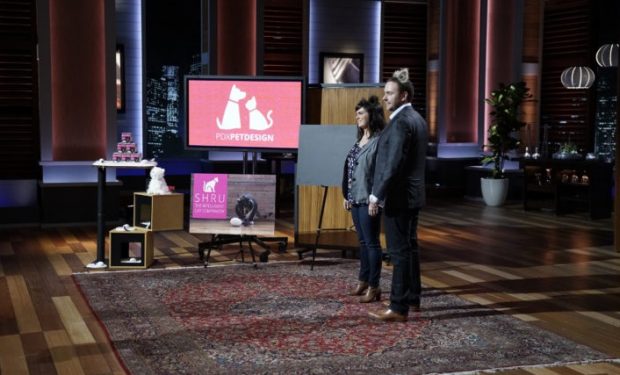 PDX Pet Design is a company that makes fun pet grooming products for cats. Two of their best-sellers are Licki Brush, a brush that emulates a cat’s tongue and is held in a human’s mouth (see photo below), and SHRU, an entertaining egg-shaped toy with a feathery tail. The entrepreneurs behind PDX Pet Design, husband and wife team Tara and Jason O’Mara of Portland, Oregon, pitched their business on Shark Tank in January 2017. They went into the Tank seeking a $300,000 investment in exchange for 15 percent equity. Alas, PDX Pet Design did not get an offer on the show.

[The Licki Brush is on sale at Amazon]

One year after the PDX Pet Design pitch on Shark Tank, the company is still in business. According to LinkedIn, Tara O’Mara didn’t quit her day job as a project manager at the computer software company Schrödinger. However, electrical engineer Jason O’Mara is still coming up with great ideas for cat toys including his latest, Laser Lunch. It’s a laser pointer with a built-in treat launcher. It looks like fun for humans and cats alike. O’Mara opened a Kickstarter campaign for Laser Lunch but had to cancel it due to unsuccessful funding, which is a shame. See video below. New episodes of Shark Tank (Season 10) air Sundays at 10 pm on ABC. [Related: 27 Favorite ‘Shark Tank’ Products — New List]

A picture is worth 1000 words. How many times can you say that a product meant to dramatically improve the bond between you and your cat works this well? Today is the day you get #LICKI — order on our site, link in bio! . . . . . . #pet #kittens #kitty #kitten #catstagram #petsagram #petstagram #cats #cat #pet #animal #animals #catlover #catslover #catlady #catsofinstagram #kittensofinstagram #LICKIbrush #lickyourcat