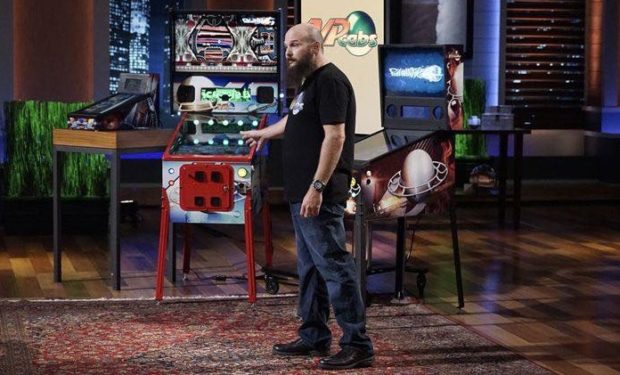 VPcabs is a company that makes virtual pinball machines. The founder of VPcabs, Brad Baker of Cincinnati, Ohio, pitched his business on Shark Tank in May 2016. He made a deal with Daymond John — $200,000 in exchange for 25 percent equity. It’s a lucrative business – prices range from $2500 to $9000 per pinball machine. John has listed VPcabs as one of his top 5 Shark Tank deals.

Since Shark Tank, Baker moved his business out of his garage and into a storefront in Fairfield, Ohio in 2017. Now the company needs more room. In June 2018, VPcabs Virtual Pinball announced that its moving to a larger space — and it’s a space with room for a bar and restaurant (tentatively called The Pinball Garage) in the tony town of Hamilton, Ohio. Baker says since appearing on Shark Tank and making the deal with John, VPcabs has been selling 300 to 500 machines a year. [Related: 27 Favorite ‘Shark Tank’ Products at Amazon — New List]

Check out Baker celebrating Back to the Future Day with Michael J. Fox, Lea Thompson and Christopher Lloyd!