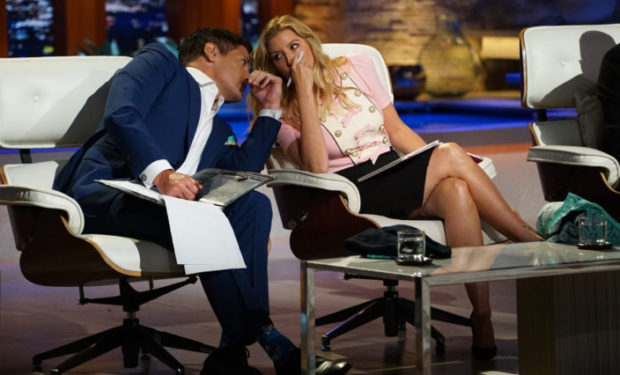 Full-time dad Andrew Bentley originally from Wisconsin is the founder of Father Figure, “the first paternity clothing company.” The clothing line is designed specifically for fathers of newborns and babies. Father Figure items include $128 denim shirts with strategically placed cloth patches to catch baby spit-ups (shoulder, forearms), $45 soft cotton t-shirts with twill loop to hold burp rags and toys, and Bandana Burp Rags (2 for $20). Bentley is pitching his innovative business on Shark Tank on October 29. He’s seeking a $80,000 investment in exchange for 15 percent equity in Father Figure. Think it’s not a big market? Talk to a new dad who’s a bit overwhelmed by new responsibilities and looking for any tools that’ll help him make it just a little bit easier. Oh, combine that idea with the fact that guys love gear. Those pre-Dad shirts just don’t hold a burp rag. But Bentley and his Father Figure brand have solutions. It’s unlikely to be a sector that reaches the level of the very well served maternity clothing market — check out maternity selection at Macy’s alone for an idea — but if you consider that for every new mom there’s a new dad, the potential for Father Figure is what gets Sharks talking. And talk they do.

During Bentley’s Father Figure presentation (which includes two cute dads and babies), billionaire and father of three Mark Cuban leans in to fellow billionaire and guest Shark Sara Blakely who knows a thing or two about carving out a new market of functional fashion accessories. She’s the CEO of Spanx, the lifestyle brand of shapewear aka body shapers. Blakely’s expertise in expanding a very specific product niche — not unlike Father Figure’s — into a huge lifestyle brand. Shark Tank airs Sundays at 9pm on ABC.