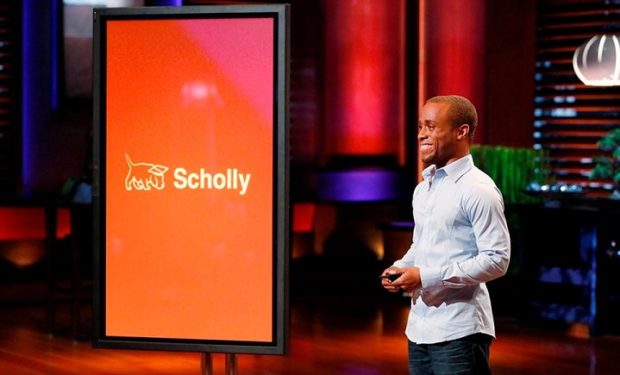 Christopher Gray is the young man behind Scholly, an app that helps people find college scholarships. He was inspired to create the app after he received more than $1 million in scholarships. The Drexel University graduate explains that while in high school, his mother lost her job and they couldn’t take out a lot of loans. “Scholarships were really the only alternative” so he applied for about 100 of them. The app has helped over 100,000 people win over $35 million in scholarships in the company’s first two years. In 2015, Gray pitched Scholly on Shark Tank and walked out with what he came in seeking: a $40,000 investment in exchange for 15 percent equity. Although instead of one Shark, he got two: Lori Greiner and Daymond John.

Since Shark Tank, Scholly has been featured in several publications including Time and Forbes. CEO Gray has appeared in a Cadillac “Daring Origins” TV commercial. But one of the most notable Scholly stories of success is Sunny Sandhu, a student who won over $600,000 in scholarships to attend Princeton University by using Scholly. He first heard of Scholly while watching Shark Tank and “downloaded the app right away.” Sunny graduates from Princeton in 2020. Video below.

Love what @Scholly5 is all about. Already doing great! #SharkTank http://t.co/kWJ6Dr37YH pic.twitter.com/nRLeZndNV4

I love the smell of #SharkTank success in the morning! Congrats @Scholly5 being #1 overall app in Apple App Store. pic.twitter.com/B5z6M9CtsI