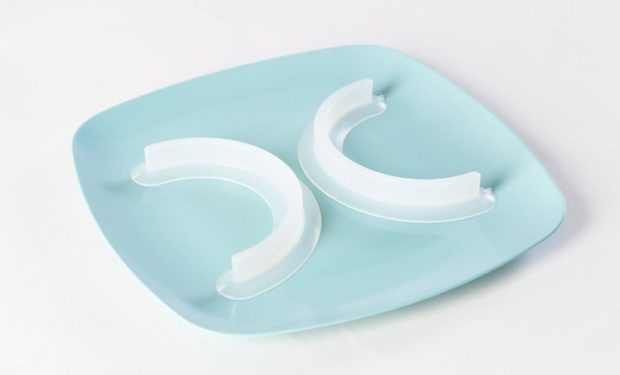 On Steve Harvey’s Funderdome, two products designed for kids go head-to-head on the August 20 episode. One is Food Cubby, a clever device that keeps food separated on a kid’s plate. Food Cubby was invented by 9-year-old Ruby of Golden, Colorado who says she’s not a picky eater but she “hates it when her salad dressing runs into her pasta sauce at dinner.” One night, she got some modeling clay to build a little wall to put on her plate – and that was her first prototype. Her mom Suzie thought it was a great idea to create something to keep food separated and that can work on any plate, rather than having to go out and buy more plastic compartment plates.

The Food Cubby suctions to a plate and is made of BPA-free silicone. And it turns out that the edge of the Food Cubby is a useful tool for people who might need help at meal time (special needs, elderly, occupational therapy needs). The Food Cubby is available in single, 2-packs, and 4-packs and are available in orange, clear, and green. On Funderdome, the Food Cubby competes against BuddyBagz, an all-in-one sleepover kit for kids, presented by Carly and her family from Milburn, New Jersey. Steve Harvey’s Funderdome airs Sundays at 9pm on ABC.