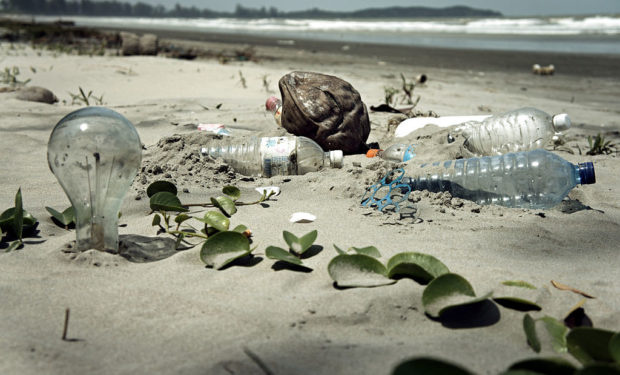 Garbage on a Malaysian beach (photo: epSos.de via Wikimedia Commons)

The tiny Pacific Island of Henderson is in a bad spot. It sits at the point of a huge circular surface ocean current called a gyre. (At last you might have a hint of what Yeats meant in Sailing to Byzantium.) Henderson’s unfortunate location at this vortex has resulted in huge amounts of ocean detritus, mostly plastic, collecting there — massive amounts. Researchers from the University of Tasmania in Australia spent three months on the uninhabited island in 2015 and were astonished when their careful studies showed that 38 million pieces of trash weighing over 17 tons had been washed up on Henderson, an island that measures  only 3 by 6 miles! 13,000 pieces of plastic are deposited there daily. Just imagine how much of this garbage is a polluting the oceans.
But amazingly, there might be some hope. A study recently published in the scientific journal Current Biology reported that wax moth caterpillars are able to digest polyethylene, the ubiquitous plastic that is one of the most difficult to degrade. The little creatures usually live in beehives and thrive on wax and honey. But researchers found that they had an additional appetite. About 100 of them were able to eat 92 mg. of plastic in 12 hours, and that the caterpillars were actually digesting the plastic not just chewing it up. Now we just need to convince them of the pleasures of living on a small desert island.