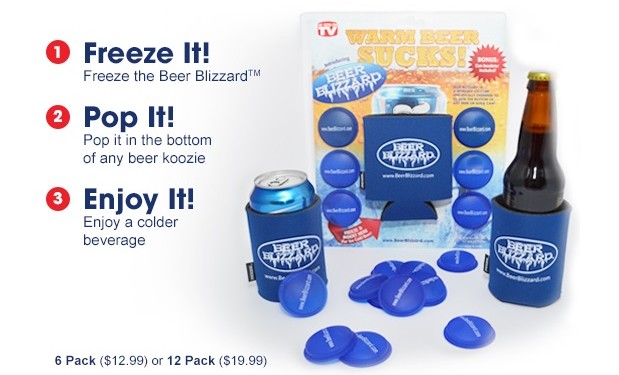 Beer Blizzard is a reusable device that keeps beer cans colder longer. It’s a plastic ice cube shaped like a disk to fit under a can of beer (water or soda) to keep the drink colder for up to 21 minutes. Beer Blizzard investor Michael Robb and his business partner Tom “Ozzy” Osborne pitched it on Shark Tank in March 2016. They made a deal with Mark Cuban — $100,000 for 25 percent equity.

[LEFT: Beer Blizzard – Ice Cube For Your Can at Amazon]

Robb says there are three goals for Beer Blizzard moving forward: closing deals with Walmart, NASCAR (getting the product at the racetracks), and with a Brewery. They’re close to completing the first two. While Robb hopes to “catch the eye of a major brewery soon” it won’t be a craft beer brewery. Robb says: “I drink real beer (Budweiser, Coors & Miller). I don’t like that craft beer sh*t that tastes like a liquid meatloaf.”