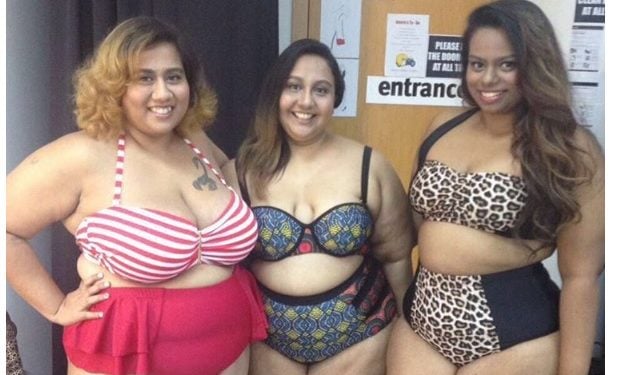 Plus size model and “writer-activist-funny girl” Aarti Olivia Dubey describes herself as a “fat brown feminist.” In other words, everything Donald Trump appears to despise. But it’s not the GOP presidential candidate that has caused Dubey so much angst in recent weeks — it’s Instagram and the trolls who live under the bridge there. Dubey, the founder of Curves Become Her — where she does most of her modeling, posted an infectiously happy 3-girl photo of herself and two pals in bikinis with smiles as big as their spirits (and, proudly, their other assets). Instagram apparently received complaints and took the photo down. But why?

The photo was part of a behind the scenes look at a professional photo shoot for CLEO magazine that featured the large glam women. Services like Twitter and Instagram are highly sensitive about taking down offensive material these days. That’s good given all the disturbing consequences of trolls stalking innocents on the sites. But the sensitivity also makes these services vulnerable to disinformation. When they get complaints their first reaction is to act on it, even if the complaints aren’t valid. That seems to be what happened here. Some judgmental people thought the picture of the three lovely women wasn’t what they wanted to see, so they reported it inappropriate — something that happens millions of times a day. But their complaints had no validity. Instagram eventually un-censored the image and put it back up, but only after an incredulous Dubey asked: “Do three fat girls in swimsuits equate to gore, porn, racism, sexism?”

@instagram THIS is the image that was reported by fat shamers and trolls, and YOU deleted it. HOW is this image being hateful, hurtful, abusive, trolling or obscene? Do 3 fat girls in swimsuits equate to gore, porn, racism, sexism? Or is it that people only want to see slim girls in swimsuits? IF this image is reported and deleted again, please trust that I WILL pursue this matter just like @rupikaur_ did when her image of lying in a period stain was removed. I am so disappointed and beyond livid right now. No Thanks to you and the people who had the gall to report this image, for making me feel so badly this Monday morning about my existence as a brown fat woman. My dear friends on social media, if you would like to help, please do so by reposting this image and sharing this post all over social media platforms, as many as you like. #bodypositive #celebratemysize #pizzasisters4lyfe #fuckfatphobia #losehatenotweight #nobodyshame #plussize #effyourbeautystandards #woc #intersectionalfeminism #fashionblogger #sizediversity #sgblogger #igsg #plussizesg #southasian #singaporean #girllove