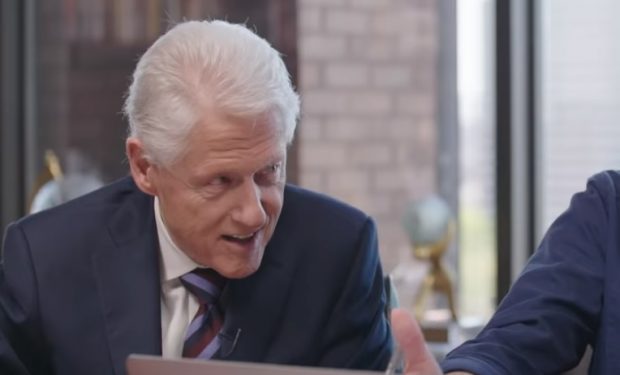 Former POTUS Bill Clinton joined his wife and almost-POTUS Hillary Clinton to advise comedian Jordan Klepper for Klepper’s new show. To promote the Comedy Central show, Klepper is pulling a stunt of crowdfunding resources to create an audio book of Hillary Clinton reading the Mueller Report. (One presumes Clinton will donate her time, given how much ammunition her paid speeches for the likes of Goldman Sachs gave to her political enemies.)

Like so much in the current culture, it’s hard to tell where the entertainment ends and the real politics begins — if that line exists at all. (Remember, current POTUS Donald Trump prepared for the executive office by starring on a Reality TV show.) But there is little doubt that for Bill Clinton the politics never stops, even when he’s entertaining. While Hillary jokes about how many lozenges it might take to get through the 300-plus page Mueller Report, Bill Clinton unambiguously accuses Attorney General William Barr of lying about — or in the more genteel political parlance “misrepresenting” — the report.

Bill Clinton says: “We’ve got to really digest what’s in the Mueller Report because we know what the Attorney General said about it is not true. He misrepresented it.” (Background: Before releasing a highly redacted version of the Mueller Report, Barr released a 4-page brief summarizing his interpretation of Mueller’s findings.) Clinton makes his statement at the 1:05 mark in the video below. Klepper premieres May 9 at 10:30/9:30C on Comedy Central.