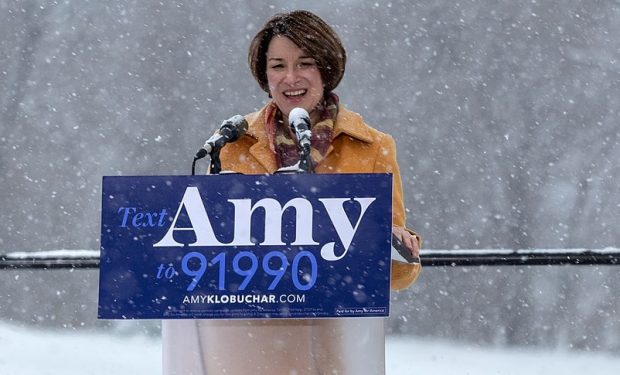 “You don’t believe me?” Minnesota Sen. Amy Klobuchar challenged skeptics in New Hampshire who think she may not be a viable candidate for president. Klobuchar is pushing the message that she’s not in the 2020 presidential race to amp her profile or feed her ego. “I come to this race ready to win, and if you don’t believe me, look at my record,” Klobuchar said. “In the last three elections, I have won every single congressional district in Minnesota including Michele Bachmann’s.” (That would be Minnesota’s 6th congressional district.)

Klobuchar has burgeoning reputation as a pragmatist, which she enhanced in a New Hampshire town hall by puncturing the dream of free college for all. She’d love to do it, but, alas, Klobuchar’s not a “magic genie” and she says there’s no way to pay for it given America’s exploding debt. It’s an example of Klobuchar being able to keep the sheen on her pragmatism despite favoring what some fiscal conservatives say are progressive ideas that simply cost too much money.

What Klobuchar does is link funding sources, where she identifies them, to her solutions for major problems. Take tackling America’s opioid addiction problem. Sure, everybody wants to fix it on both sides of the aisle, but Klobuchar directly targets a solution funding source at the root of this outsize problem, saying: “why don’t we pay for it by getting money from the very drug companies that got people addicted in the first place?”

“How do you pay for [addiction recovery programs]? Well, I’ve got a good start. And that is, why don’t we pay for it by getting money from the very drug companies that got people addicted in the first place.” — Sen. Amy Klobuchar #KlobucharTownHall

WATCH: Amy talks about “that opportunity that is America.” pic.twitter.com/ZTyRqlXnDM