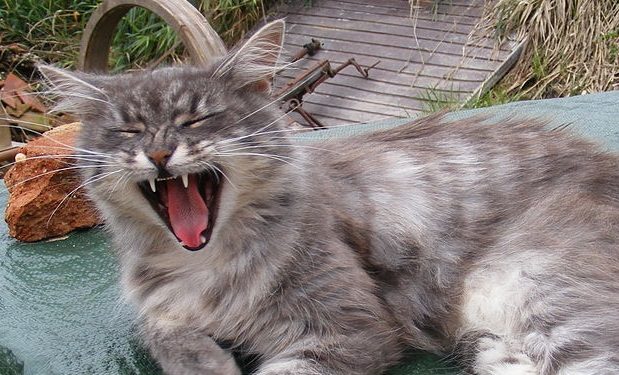 Bored, but not unhappy with you! (photo: Mattes [Public domain], via Wikimedia Commons)

In news that comes as no surprise to the legions of people who flood the Internet with videos of cute kittens, a new study reveals that cats do actually like people. While felines are often maligned as cold, aloof, superior gods subject to the whims of the mere mortals who feed and clean up after them, new research indicates that cats are far more sociable than previously thought, and thrive in an environment where they can interact fully with people. [Read: swat objects belonging to human off table, sit on human’s chest until human gives adequate attention, wake up human at four o’clock in the morning]

As reported by the New York Times, the Oregon State University study showed that in a sample of cats offered the choices of interacting with people, food, scents, and toys, the vast majority chose to cuddle humans. The study didn’t say, however, what sort of food or toys were offered, so it’s possible the study is inherently flawed, because, let’s face it, cats are bloody fussy. Commenting on the findings, biologist John Bradshaw says the study proves that cats are more complex than we can imagine, and that “not all cats are the same, despite the fact that people who don’t like cats say they’re all the same, they’re aloof, and so on.” Indeed not. One cat – clearly the Jeff Spicoli of the cat world – ignored humans, food, and toys, and opted for the pleasures of catnip.