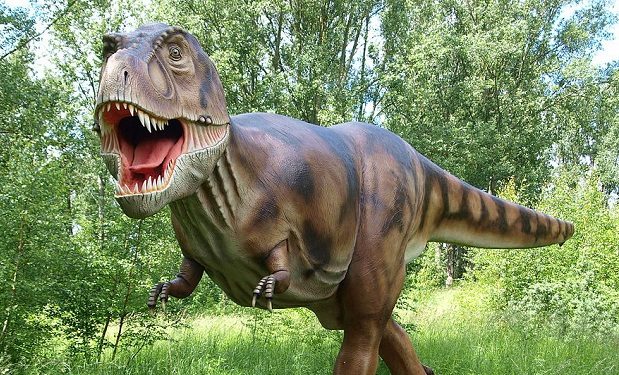 T. rex - just a model so far (photo by Dellex via Wikimedia Commons)

Long thought an impossibility, dinosaur proteins have been recovered and identified! Paleontologist Mary Schweitzer from North Carolina State University has repeated an experiment that almost unequivocally proves that she has recovered intact protein fragments from dinosaur bones that were 65 and 85 million years old. (Contrary to some beliefs, there were no humans around to accomplish this at the time.) Interestingly, the pieces they found most closely resembled that of collagen that is found in modern alligators. What accounted for the amazing preservation of these pieces remains unclear, although there are technical theories.

Then came a study just published in Nature Communications that purports to show that collagen was found in a 195 million-year-old dinosaur rib. The somewhat weaker evidence was discovered with a technique that I challenge you to say quickly: Raman spectroscopy and synchrotron radiation Fourier transform microspectroscopy — blissfully referred to as AS-FTIR. Other scientists have reported detecting other proteins in fossils, encouraging still more attempts at finding and using other proteins and amino acids to study dinosaur evolution and that of other extinct animals. This is a long way from reconstructing ancient DNA and hopefully conjuring up a live T. rex. But it’s a start.