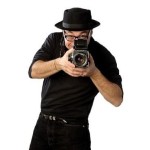 Ric Kallaher photographs and documents the Events and People of Advertising, Media, Arts and Culture. His mission is to artfully create strong, provocative & transcendent visual records of meaningful relationships & significant moments. Ric has been the photographer of record for all of the top advertising awards shows, including The One Show Festival, The ANDY Awards, the EFFIES Awards, The Art Directors Club, and The Advertising Club. He has photographed separate cover stories on Fox News' Roger Ailes and Sean Hannity as well as a feature on former President Bill Clinton. In 2010 he became the principal event photographer for New York's prestigious Museum of Arts & Design on Columbus Circle. He has photographed celebrities such as George Clooney, Ellen Barkin, and Cindy Crawford and done studio portraits of Philip Glass, E. L. Doctorow, John Updike, Richard Ford, Joyce Carol Oates, and others. Ric also donates his photographic talents to FLASHES OF HOPE, a national nonprofit organization that changes the way children with cancer see themselves through the gift of photography.