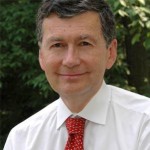 Reed Hundt is the former Chairman of the United States Federal Communications Commission (1993 to 1997, appointed by President Bill Clinton). At the FCC, he oversaw the introduction of spectrum auctions and the implementation of the Telecommunications Act of 1996 designed to substantially reduce the rates for international telecommunications service. Hundt is currently the CEO of the Coalition for Green Capital, a non-profit advocacy coalition of businesses, investors and attorneys. He is also the author of the new e-book, Zero Hour: Time to Build the Clean Power Platform.