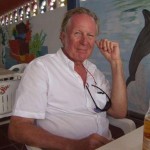 Jeremiah Tower, a creative culinary giant, was chef at the famed Chez Panisse during the moment when it redefined the idea of American cooking. He later created the seminal Stars restaurant, a San Francisco sensation that went on to open far-flung global operations and launch the careers of numerous world-renowned chefs, including Mario Batali. Both Tower and his books have won James Beard Foundation awards. He is considered by many to have invented, along with Alice Waters and Wolfgang Puck, "California Cuisine."