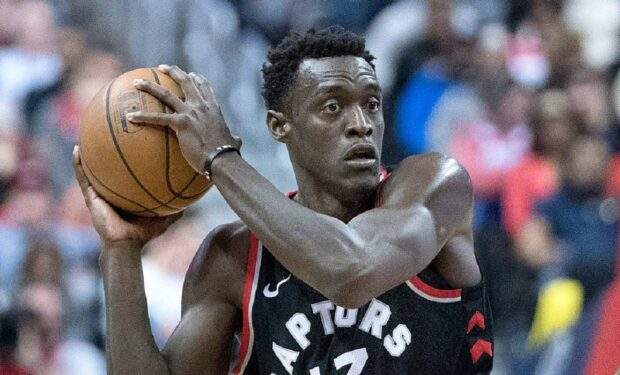 Sports journalist Taylor Rooks just can’t help becoming part of the story. Like many commanding interviewers before her — the late Barbara Walters and Oprah come to mind — Rooks finds a way to post the hard and interesting questions, while also making her interview subjects feel comfortable enough to expound on their answers.

Below is Rooks getting Charles Barkley to talk candidly about his fractured relationship with erstwhile best friend Michael Jordan.

But though the stars that Rooks interviews seem to be put at ease in her presence, fans watching the interviews — especially the latest one with Toronto Raptors star Pascal Siakam (photo above) — are far less at ease. Indeed, viewers confess to being driven to utter distraction by the magnetic presence of Rooks. The comment sections beneath her work are filled with people who say they just can’t get past her allure.

Rooks has addressed the issue of her enviable looks in the past — see podcast video below — saying that her looks shouldn’t have anything to do with how good she is at her job.

And her looks don’t have anything to do with how good she is at her job — it’s fans who have to up their own game so they can focus. Talking about Siakam’s relative cool around Rooks, one fan comments: “Bro got 99 composure I wouldn’t be able to get coherent sentences out around Taylor.”

You may have heard the phrase a “face for radio” — Rooks has the opposite.

In the interview, Siakam is pouring his heart out about his late father and how losing him was a tumultuous event in his life, yet in the comments a multitude of people are just talking about Rooks and her beauty. As one observant fan puts it: “Pascal talking about the hardest times of his life and people in the comments can’t focus.”

One fan, mindful that good looks and professional qualifications are different things — and also that TV journalists tend to look better than average people — went out of their way to give Rooks double credit, for looking good and being great at the gig: “She so wonderful to look at😂😂😂😂 yes she is an amazing journalist! But damn she is the most candiest of eye candies. But also a fantastic reporter.”

Rooks herself is aware that she’s camera-ready, as demonstrated below, and the camera is more than happy to oblige.