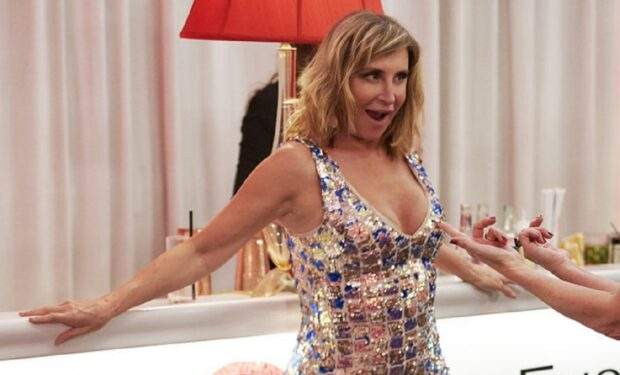 When New York socialite Sonja Morgan joined Bravo’s The Real Housewives of New York City for Season 3, she quickly became a fan favorite. Sonja was voted “Best Comedienne” in the fan-chosen Real Housewives Awards — four times! — and Academy Award-winning actress Jennifer Lawrence has said on the record that Sonja is her favorite Housewife.

The bad news is: Morgan won’t be back for Season 14 of RHONYC — the new 2023 season will feature an entirely new cast of women. The good news is: Sonja and her RHONYC co-star Luann de Lesseps are filming the spin-off series, Luann and Sonja: Welcome to Crappie Lake.

The premise of the show? Sonja and Luann are invited to Benton, Illinois to spruce up the small town, which has a population just shy of 7,000.

It’s being promoted as a modern day — and adult — version of The Simple Life, which starred celebrity teenagers Paris Hilton and Nicole Richie (see above). Note: Paris’s mother, Kathy Hilton, is currently on The Real Housewives of Beverly Hills.

When not filming ‘Crappie Lake,’ Sonja still finds time to bop around New York City. In the New Year, Sonja shared the photo below, taken in the infamously cold vestibule of her Manhattan townhouse, and announced: “I’m keeping my curves and growing my hair.”

Sonja’s fans approve of her new look for the new year. As one wrote: “Looking good! Curves and long hair look good on you. You also look happy and that’s the best part.”

Another fan chimed in: “You look great Sonja! Hair is perfect shade. Your curves are perfect, look so fit.”