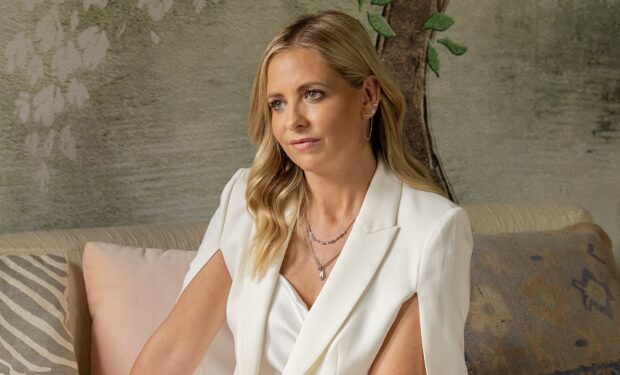 Hollywood star Sarah Michelle Gellar is known for many roles on TV shows including Buffy the Vampire Slayer, and movies including I Know What You Did Last Summer, Scream, Scooby-Doo, and Cruel Intentions, among many others.

Get ready to see more of Gellar: she stars in the new fantasy horror series Wolf Pack on Paramount+. Trailer below.

While getting her fans hyped for Wolf Pack, Gellar shared the throwback photo below of her with the cast of Dawson’s Creek — that other teenage drama that ran on The CW at the same time as Buffy the Vampire Slayer (1998-2003). Geller captioned the photo: “in honor of my new show premiering this month, here’s me launching my original show” with laughing/crying emojis.

When David Boreanaz, Gellar’s co-star on Buffy the Vampire Slayer, saw the post, he replied: “I must have been at the bar” with his own laughing/crying emoji. Boreanaz played a vampire named Angel, subject of the CW spin-off series, Angel, which ran from 1999 to 2004.

Buffy and Angel were romantically involved on the show even though Angel is a vampire (albeit a remorseful one) and Buffy’s job is to slay vampires. It was complicated!

Buffy the Vampire Slayer fans still get excited just thinking about the two characters and the actors keeping in touch. As one writes: “You two continue to make my Buffy/Angel shipper heart palpitate with your interactions.”

Another chimed in: “it literally melts my heart that you 2 still talk! Buffy and Angel made my life complete in my care free teenager years!”

Twenty years later and fans are still talking about their chemistry (as seen above).

Other “Bangel” fans want a reunion and they aren’t too picky about the cast as long — as it includes Gellar and Boreanaz. One fan replied: “we need a reunion…anything with you two in it! Hell…with everyone from the picture and freddy.” Freddy is Gellar’s husband, actor Freddy Prinze, Jr.