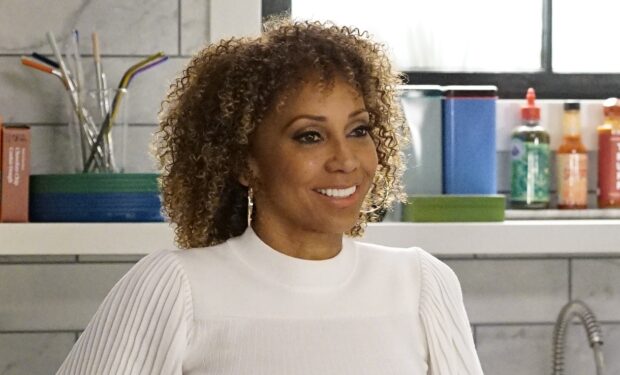 Get ready to see a lot of actress Holly Robinson Peete. She’s getting ready to film the movie Runnin’ with Johnson with Elizabeth Regen, who wrote the script and directs. As an actress, Regen is best known for her roles on TV sitcoms including Whoopi (Rita) and Sherri (Angie) — before both women became TV talk show hosts.

When not on a movie set, Peete supports fellow actors including Nia Long who stars in the new Kenya Barris movie, You People, with Eddie Murphy, Julia Louis-Dreyfus, and Jonah Hill, among others.

For the premiere, Peete turned heads in a stunning animal-print “single-notch safari blazer and pant suit” and peek-a-boo platform stilettos. (That’s her husband, former NFL quarterback Rodney Peete, above.) Peete’s fans are going wild over the look. More than one replied: “That suit is fire!”

Robinson’s suit is by designer Sergio Hudson, who recently opened his own shop on Amazon.

Supermodel Iman (above) and Toni Braxton (below) are both fans of Sergio Hudson and his animal-print, too.

You People (watch trailer below) will be released on Netflix on Friday, January 27.