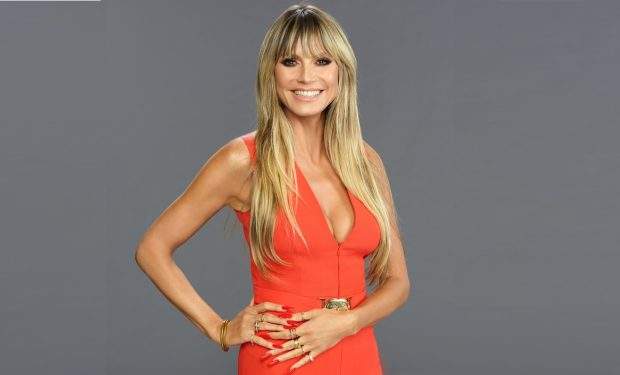 Supermodel Heidi Klum is excited about the fourth night of auditions on America’s Got Talent: All Stars because she finally gets to use her Golden Buzzer for a worthy contestant.

When not watching and judging talent on the AGT spin-off with executive producer Simon Cowell and standup comedian Howie Mandel, Klum, well, models the fashion-forward ensembles she wears on the show and off.

That long denim overall dress above is by MOSCHINO.

Before hitting the Golden Buzzer, Klum modeled an upcycled black denim jacket (by designer Kevin Germanier) with a tiny mini skirt, fishnets, and thigh-high stilettos boots. Swipe the photo above to see Klum leaning against that giant pink ball.

Klum kept her message simple to her millions of followers on Instagram: “Hi” she wrote with a red heart emoji. After all, a picture is worth a thousand words.

Klum wore another upcycled Kevin Germanier ensemble for the Golden Globes award ceremony, too, see above.

America’s Got Talent: All-Stars airs Mondays and Tuesdays at 8 pm ET on NBC.