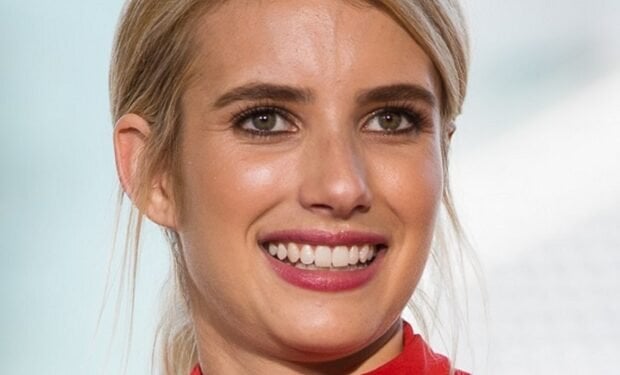 Hollywood movie star Emma Roberts is in the Big Apple to promote her new project, the romcom Maybe I Do with the legendary Susan Sarandon, Richard Gere, William H. Macy and Diane Keaton. Trailer below.

It’s January in New York but the temperature is mild enough for Roberts to go bare-legged in the stunning green pleated mini skirt suit (by AMI Paris) below.

Those ivory-colored sky-high platform sandals (called “The Ari”) are by Larroudé. When the designer shoe company shared the fun photos above, it wrote: “@emmaroberts screams, you scream, we all scream for the ivory Ari🤍.”

Note: Roberts is known for her role as Jill Roberts in the movie Scream 4 and as Chanel on the TV series Scream Queens.

They’re described as: “Equal parts Upper East Side and downtown cool, this Winter white pair is a breath of fresh.”

Get ready to see more of Roberts: she will appear next on the big screen as Mary Parker in the upcoming Spider-Man spin-off Madame Web with Dakota Johnson (as Madame Web) and Sydney Sweeney (Euphoria). Madame Web is scheduled for a February 2024 release.