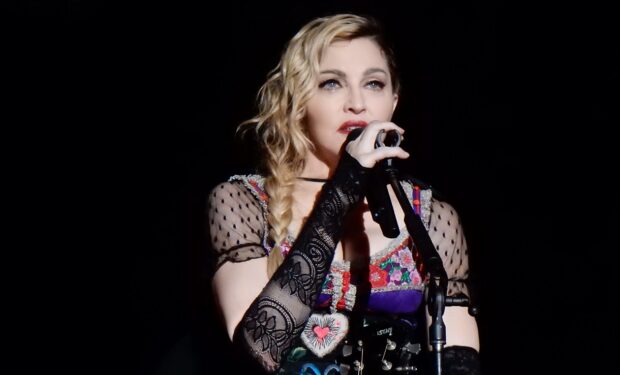 Comedian Amy Schumer and plenty of other Hollywood notables (Lil Wayne, Jack Black, Judd Apatow, Diplo, Eric Andre and more) play a game of Truth or Dare with Madonna that couldn’t survive even the most liberal censor — or pass the raunchiest etiquette test. (It’s a remake of a scene in Madonna’s 1991 “documentary” Madonna: Truth or Dare.)

Ultimately declining to pantomime the act, Schumer nevertheless reveals that said body part on her husband is a “gaping” one. She then laughs, saying, “I don’t think he’d mind me saying.” In (related?) news, Schumer has written about having trouble dating.

The scene is all part of a setup for the announcement of a World Tour by Madonna — a tour the people around the table presume the world is clamoring for. It’s another dare — and likely to be just as raunchy? Madonna takes the dare, of course. Now for the truth.

Madonna is still a giant name in the business and she will bring (as she says repeatedly) four decades of music to the stage – a catalog like few can draw upon. It could well be a record-setting earner, with Madonna fans present all over the globe. Yet early on the announcement has received fewer than a half million likes on Instagram. And even fewer views on YouTube. Miley Cyrus singing “Flowers” — not that’s popular.

Still, Madonna is an icon — that much overused word. In the comments, one fan paints late stage Madonna in a flattering and interesting light, highlighting her performing chops and longevity: “She tried so many things in her life, sometimes she was good sometimes she was bad. But no one can deny that when she’s on stage doing a show there’s no one like her.” And now she’s trying this.