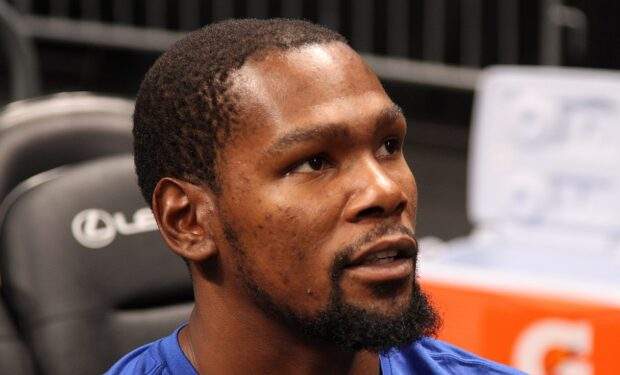 NBA teams and NBA players are scoring a record number of points this season. Whether it’s the added field goal attempts that accrue due to the implementation of the new breakaway foul rule, or just good defense getting beat by “better offense” — as former NBA star and broadcaster Mark Jackson frequently says — the hoop is getting filled up.

Recently Kevin Durant has taken the return of Kyrie Irving to the Brooklyn Nets lineup and started scoring like Jason Tatum, Luka Doncic and Steph Curry. Those three sit at the top of the NBA scoring leader list, with Durant rising into the 6th spot after his recent scoring spree.

As a result, Brooklyn is 3-1 in their last four games, surging to .500+ (12-11) and into the 8th spot in the Eastern Conference — after a lackluster start that saw head coach Steve Nash depart the team.

(To help situate leader Doncic’s heady scoring prowess so far, consider this: Durant is averaging a remarkable 38 ppg over the last four games; Doncic is averaging 33.5ppg over the entire season.)

Durant’s efficiency has also been remarkable during the stretch. As Nick Friedell points out below, Durant is shooting nearly 70% in the past three games.

Kevin Durant is 44-for-63 from the field over his last three games.

Still, Tatum’s Celtics are alone at the top after their victory over the Heat (Tatum, 49 points) marked the first time the franchise had scored 130 points or more in three consecutive games since long before Tatum was born. Tatum is only fractionally behind Durant’s production over his last four games, averaging 37.75 ppg over that stretch.