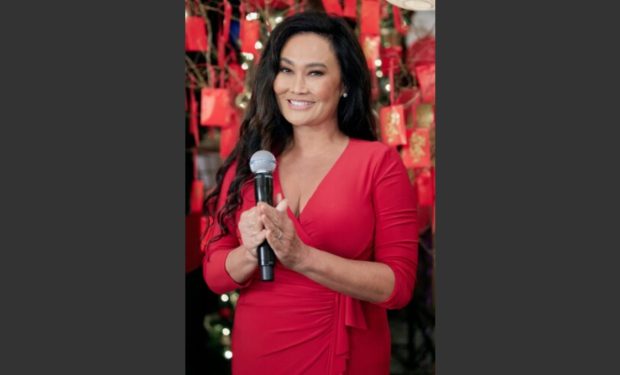 The protagonist in the new Hallmark Channel ‘Countdown to Christmas movie, A Big Fat Family Christmas, is photojournalist Liv Chang (Shannon Chan-Kent). When her family’s blow-out Christmas party gets her a cover story, she tries to keep her ties to the party a secret. Doing so, she risks her career and losing her relationship with new co-worker Henry (Shannon Kook).

As seen in the trailer above, Carrere’s character teases her daughter Liv about Henry “dreaming about her.” Carrere knows how to cast a dreamy spell on a man, as seen in the Wayne’s World scene below with Mike Myers.

It’s been a busy year for Carrere: she’s also stars in comedian Jo Koy’s 2022 movie Easter Sunday, which is about a comedian who “attends a gathering of his loud and dysfunctional Filipino American family on Easter Sunday.”