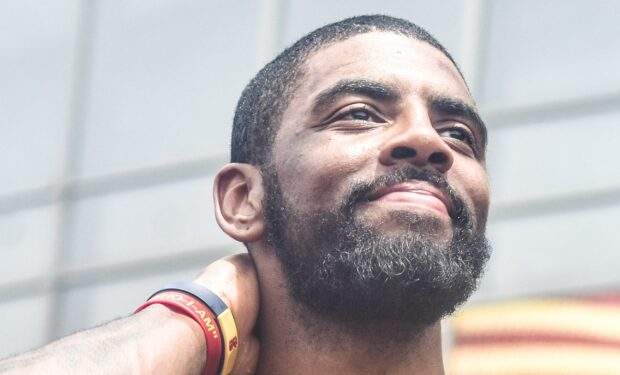 Sports journalist and ESPN talking head Stephen A. Smith was not among those who gave NBA star Kyrie Irving a pass when it came to Irving’s now famous sharing of a link to a film containing anti-Semitic content. Smith admits that his relationship with “Kyrie and his peeps” has suffered because of his condemnation of Irving’s actions.

The Smith-Irving relationship damage persists, according to Smith, even though Smith did say that the punishment the NBA and Brooklyn Nets imposed on Irving did not fit the crime, likening the enforced requirements for Irving’s NBA return to a “knee on the back of his neck.”

Now in backing LeBron James‘s intriguing question about why he wasn’t asked more about a disturbing photo of Cowboys owner Jerry Jones seemingly standing against school desegregation in his youth, Smith resorted to Kyrie Irving’s words to show his support of James’s position.

.@KingJames was on point on this! pic.twitter.com/tc62v7F7wN

James is always asked about social issues — he tends to welcome it, not being one to “shut up and dribble,” of course. So why was he asked consistently by the media about the Irving situation, and not at all about the Jones situation? That’s the question — and media bias would seem to be the answer, or at least that’s what James implies with his ask.

“I was wondering why I haven’t gotten a question from you guys about the Jerry Jones photo,” James said, “but when the Kyrie thing was going on, you guys were quick to ask questions about that.”

Smith found himself needing the words of Kyrie Irving, of all people, to best explain James’s position, saying:

“[That James] had to bring up the subject to media in the year 2022 gives credence and buffers the argument that Kyrie Irving was making when Kyrie said, ‘where’s the intensity when our people’s going through stuff? When we’ve been afflicted? Y’all gonna have the same momentum, the same passion, you gonna bring that to the table?’ That’s what LeBron was talking about!”

For Smith and James — and no doubt, Irving — the answer this week is no.