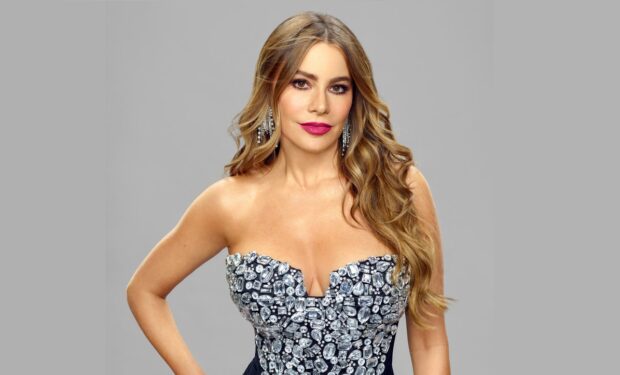 When not selling her new jewelry line at Walmart or serving as a judge on America’s Got Talent with Simon Cowell, Howie Mandell and Heidi Klum, former Modern Family actress Sofia Vergara spends time with family.

The Colombian-born beauty is spending the holidays on an island with her husband of seven years, actor Joe Manganiello (Magic Mike, True Blood, Spider-Man). When she shared the aerial photo above, of a private plane on the coast of a tropical island, she wrote: “we r home!”

While one observant fan noted how perfectly Vergara’s frosted lips match her cocktail (above), most comments were directed at Manganiello and the dog in his arms.

Many fans voiced complaints about Manganiello. One asked: “Is the chihuahua permanently attached to Joe?”, and another asked “Does your husband ever let go of that dog?” See additional Joe and dog photos below from their Thanksgiving trip to Disneyland.

Manganiello even brought his dog, Bubbles, with him on The Kelly Clarkson Show. He says the dog was a rescue dog, and it was his wife who wanted the dog. But (according to Manganiello) Bubbles likes him more (he refers to himself as “Dada”) and he claims with pride that the dog growls at his wife and is very protective of him — aka Dada.

A post shared by The Kelly Clarkson Show (@kellyclarksonshow)

In the first photo above, Manganiello is rocking a Metallica t-shirt, which reflects his most recent movie role. He starred in the 2022 Netflix teen comedy-drama Metal Lords.

It’s about two friends in high school who set out to start a metal band and win the Battle of the Bands competition. (Spoiler alert: no one else at school is a fan of metal.) Manganiello plays Dr. Troy Nix, former metal band guitarist-turned-doctor who runs a rehab clinic. Trailer above.