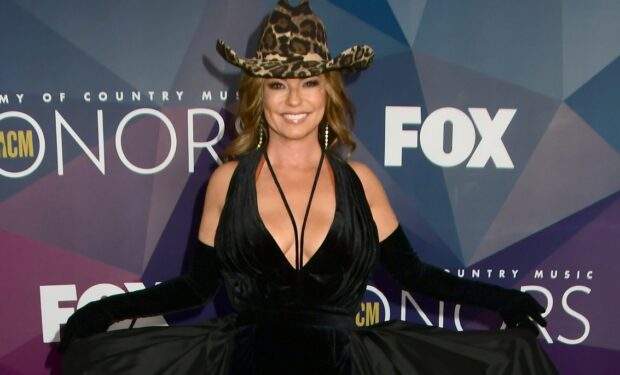 Country pop star Shania Twain has been busy this year. The 57-year-old Canadian-born singer went back on tour (Queen of Me Tour), she played the teapot in Disney’s 30th anniversary celebration of Beauty and the Beast (see below with Martin Short), and she’s releasing new music including her single, Giddy Up (available January 5, 2023).

When not on stage, Twain is often striking a pose and in provocative ensembles. Not all of her new modern looks are sitting well with fans. As seen below, Twain is rocking a more fierce look than usual: her hair is tightly pulled back, her face is powdered white, and she’s wearing a pointy black bustier which evokes images of another music icon, Madonna.

Some Twain fans are questioning her decision to pose in a fur coat (“I hope that’s faux fur) and with “a chained bird,” but the majority of complaints reflect the notion that Twain no longer looks like she did at the height of her success in the 1990s. More than one fan replied: “Doesn’t look like you.”

With the open-legged posed photo above, Twain writes: “With clothes, I could speak and tell a story about myself, by the way I moved my body, the drape of the fabrics, the colours, where the focus was. And I loved that about fashion, the fun of it, the expression.”

Even though Twain says she’s having fun with fashion in her fifties, many fans are not pleased with the change of her appearance. One fan boldly replied: “This is not glorious! Bring back 90’s Shania!!”