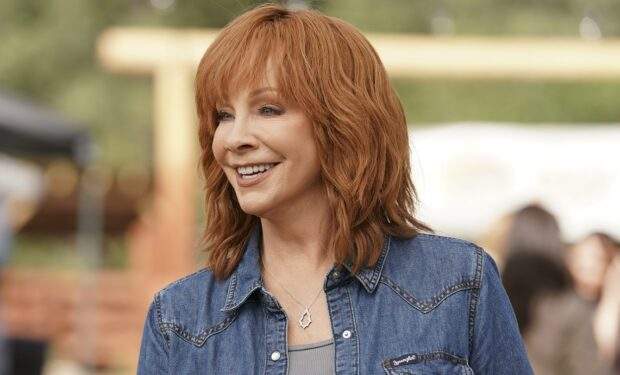 On the Season 3 winter season finale of Big Sky, Jenny (Katheryn Winnick) and Beau (Jensen Ackles) investigate the untimely disappearance of a missing groom from a wedding while Cassie (Kylie Bunbury) enlists the help of Denise (Dedee Pfeiffer) and Beau’s daughter Emily to unravel the lies surrounding Walter (Patrick Gallagher). When Big Sky fans watched the sneak peek video below, more than one replied: “Don’t mess with Reba!”

When not filming Big Sky or on stage performing, the country music legend often models. When Reba shared the photo below of her in a stunning red hot sleeveless jumpsuit with lots of sparkles, her fans went wild with praise. More than one had just one word, “Fancy!”

That v-neck sequin mesh jumpsuit is from Reba’s clothing collection at department store Dillard’s. The sexy ensemble is getting 5-star reviews from customers including: “Feels fantastic on.”