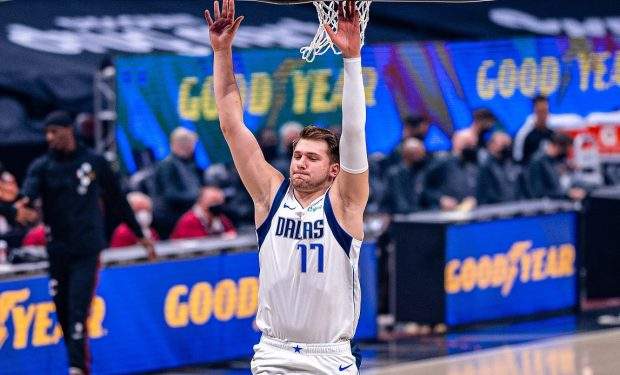 After Luka Doncic went nuts on the court and the stat sheet leading his desultory Mavs to a comeback win over the cooling Knicks, NBA Twitter went just as nuts praising the 23-year-old star. NBA stars past and present chimed in on the Luka Magic.

Notable were Trae Young, who was traded for Doncic on draft day in 2018, saying that basketball was just “easy” for Luka. Young wrote: “Luka just having fun! The game EZ.”

Hall of Famer Kevin Garnett took note of the new 24-foot-tall Dirk Nowitzki statue that the Mavs and billionaire owner Mark Cuban unveiled outside the American Airlines Center on Christmas Day and made a prediction.

Garnett wrote: “It’ll be another statue in Dallas… Luka is like that!”

It’ll be another statue in Dallas… Luka is like that! 🤷🏾‍♂️

Chicago Bulls star DeMar DeRozan, who knows something about catching fire, also chimed in writing only: “This dude Luka!!” The statement needed no further embellishment for anyone watching the game.

Celtics legend Paul Pierce compared Doncic’s stat line to something from Wilt Chamberlain — in another words, the stratosphere. Pierce wrote: “Omg Luka 60 21 and 10 never seen these numbers in my lifetime may never again Wilt like video game like damn.”