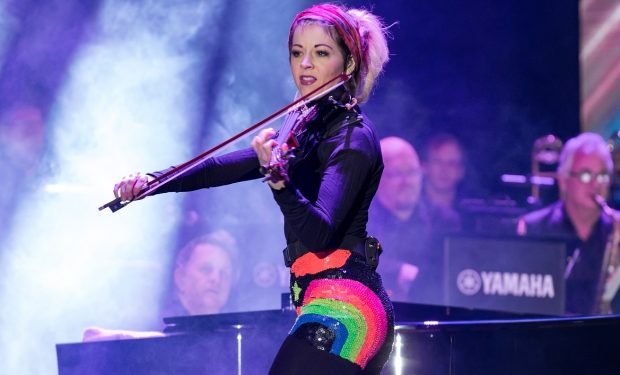 The protagonist of the new Hallmark Channel ‘Countdown to Christmas’ movie A Fabled Holiday is Talia (Brooke D’Orsay). When she visits a storybook like town full of Christmas spirit, she reunites with her handsome childhood best friend Anderson (Ryan Paevey). He tells her that she hasn’t changed a bit: “you still have that overreactive imagination.”

Talia and Anderson enjoy an evening outdoors near a gazebo and are treated to a performance by a fairesque dancing violinist (Lindsey Stirling). “Welcome to a night of wonder,” she says as she twirls around with her decorated violin and long gauzy skirt.

Sterling got her big break in 2006 when she competed on America’s Got Talent in 2010. Since has amassed more than 13 million subscribers on YouTube, competed on Dancing with the Stars, and has released six studio album including her latest, Snow Waltz, which contains a mix of covers of Christmas standards and original tracks.

A Fabled Holiday premieres on Hallmark Channel on Saturday, December 3 at 8 pm ET.