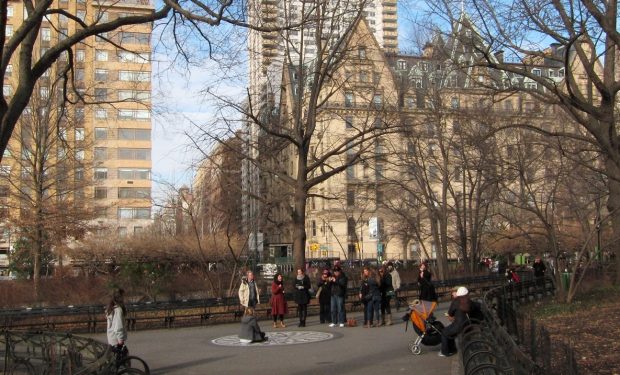 Prior to marrying Japanese visual artist Yoko Ono in 1968, the late singer/songwriter and former Beatle John Lennon was married Cynthia Powell. They met while studying at Liverpool College of Art and married in 1962. They had a child together, John Charles Julian Lennon, who was born in 1963. (Lennon and Powell divorced in 1968.)

Known as Julian Lennon (also known as “Jude” as referred to in the 1968 Beatles song ‘Hey Jude’ which Paul McCartney wrote for the then 5-year-old Lennon), the younger Lennon followed in his famous father’s footsteps as a musician.

Julian Lennon launched his music career in 1984 with the album Valotte, best known for the hit single ‘Too Late for Goodbyes.’ It earned Lennon a nomination for the Grammy Award for Best New Artist in 1985. (Note: John Lennon died in 1980 — he was shot and fatally wounded outside his apartment building, the Dakota, in NYC. He was 40.)

Earlier this year, Julian Lennon released his seventh studio album, Jude (above). Interesting fact: the album cover photo of ‘Jude’ was taken by May Pang in 1974. May Pang was the former personal assistant to John Lennon and Yoko Ono; when the couple separated in 1973, Pang and John Lennon began a year-and-a-half romantic relationship.

According to Rolling Stone magazine, Julian began to take his own interest in photography seriously after photographing his half-brother Sean Lennon‘s music tour in 2007. (Below is a photo of Julian and Sean.)

In the intimate video above, Julian Lennon describes photography as “an urge, a drive, a madness within.” He says if he sees something that moves him and he has a camera with him, he has to take a picture of it. “There is no choice,” he says.

Note: Julian Lennon’s mother, Cynthia Powell Lennon, died after a bout of cancer in 2015. She was 75.