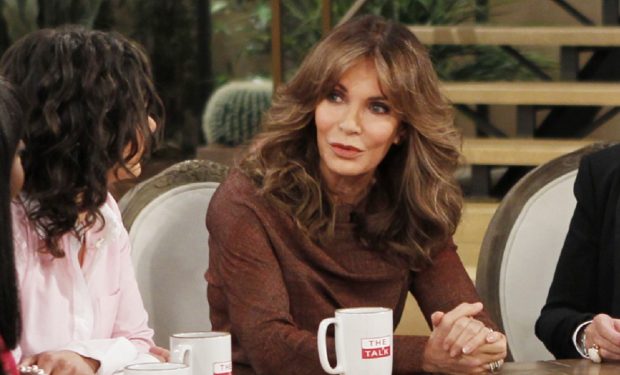 Hollywood star Jaclyn Smith is best known for her role as Kelly Garrett in the popular 1970s TV series Charlie’s Angels with the late Farrah Fawcett and Kate Jackson.

After launching a successful acting career, the former Breck hair shampoo model became the first celebrity to roll out her own clothing line via Kmart.

Now 77, Smith is still modeling and selling clothing. The white cardigan she’s wearing below is available at Nordstrom Rack. Smith suggests that the lightweight v-neck sweater “can be worn on its own or styled as a layering piece.”

When Law & Order: Special Victims Unit star Mariska Hargitay saw the photos, she replied: “You are just a gorgeous creature.” Another fan prayed: “Please god, let me age like this!“

If you see a resemblance to triple-threat entertainer Jennifer Lopez Affleck, you’re not alone, and you’re not crazy. Smith was styled by celebrity makeup artist Kate Best, who also works with JLo (see above).

That’s Jaclyn Smith above, not JLo.