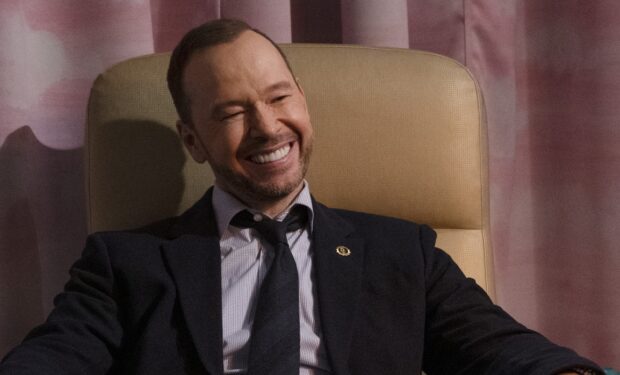 The big storyline in the Blue Bloods episode ‘Heroes’ is about Erin Reagan (Bridget Moynahan) putting Anthony’s (Steven Schirripa) daughter, Sophia (Isabel Harper Leight), in front of a grand jury as she’s the sole eyewitness to a fatal shooting. Anthony is not pleased with Erin’s decision, to put it lightly.

Erin’s NYPD cop brothers Danny (Donnie Wahlberg) and Jamie (Will Estes) are also busy at work as they investigate a violent mugging. However, there is a scene of comic relief.

In the sneak peek video above, while Jamie is working on his vintage Chevy Chevelle, Erin approaches him and reveals that she had her first kiss in that car. When Danny comes out, he chimes in and tells his siblings that he took Marie Romano to his senior prom in the car. Erin remembers Marie and her nickname “Double D Marie.” The title of this article will ring true when you hear Danny deliver the punchline.

Blue Bloods airs Fridays at 10 pm on CBS, right after the new firefighter drama Fire Country at 9 pm and S.W.A.T. at 8 pm.