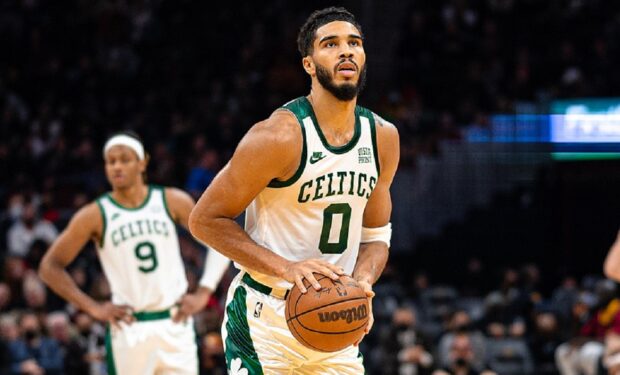 Boston Celtics head coach Joe Mazzulla is on a bunch of short lists for NBA Coach of the Year right now, with the loaded Celtics holding down first place in the Eastern Conference as Jayson Tatum and Jaylen Brown take turns destroying opposing defenses.

But winning Coach of the Year honors wasn’t even a remote possibility for Mazzulla when the NBA season began. Because back then Mazzulla wasn’t the head coach of the Celtics — Ime Udoka was. But some unfortunate behavior led to Udoka’s ouster and Mazzulla stepped up and the Celts have been just rolling ever since.

You might say Mazzulla’s prayers have been answered, and if not his, then certainly the prayers of Celtics Nation. Answered prayers, no doubt, sounds like something the deeply Catholic Mazzulla knows plenty about.

Mazzulla recently put his faith front and center during a postgame media appearance, startling a media rep who tried to engage him in some light celebrity-centered gossip. The Celtics are such a hot ticket that British royals Prince William and Kate Middleton were in the front row for a home game. Asked afterward if he’d had a chance to meet the “royal couple,” a stone-faced Mazzulla pretended not to get the reference and answered with his own question: “Jesus, Mary and Joseph?”

The reporter chuckled and clarified the question before Mazzulla offered his own clarification — that Jesus, Mary and Joseph were the only “royal family” with which he is familiar. Mazzulla did not even come close to smiling lightheartedly about this exchange.

Notice the above tweet doesn’t emanate from the Celtics but from the Twitter account of CatholicVote.org, which celebrated Mazulla’s answer, saying: “This Catholic NBA Coach doesn’t mess around.”

One Catholic fan on the Mazzulla bandwagon described Mazzulla’s moment this way: “The way he performed a visual sweep across the room, like, ‘Any objections? … concerns? further questions? Very well then…’.”

Other Catholics in the comments continue to praise Muzzulla for his declaration of faith — a bold display that stood out against the light celebrity banter expected — with many promising to watch more games and “pay more attention the NBA,” as one wrote.

The retweet count has neared 3000. And if Mazzulla doesn’t win NBA Coach of the Year, he’s already — according to another fan — got something for his trophy case. “Coach…that’s an award winning statement right there!” reads the comment.