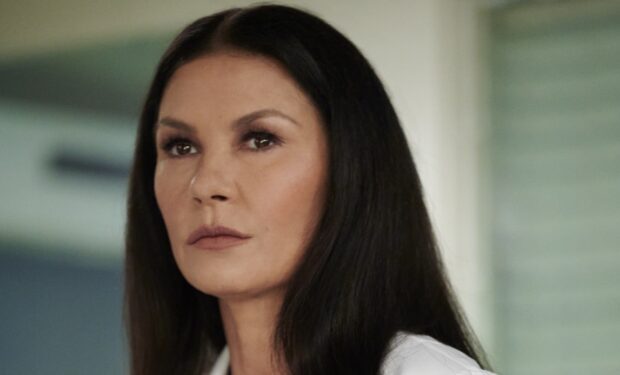 Hollywood movie star, triple-threat Catherine Zeta-Jones is known for her roles in Chicago, The Terminal, The Mask of Zorro, and most recently Wednesday, as the iconic matriarch Morticia Addams.

Get ready to see more of the Welsh brunette but as a blonde.

As seen in the sneak peek video below, Zeta-Jones stars in the upcoming Disney+ series National Treasure: Edge of History. For the role as the spelunking “badass billionaire, black-market antiquities expert” Billie, Zeta-Jones rocks a gorgeous platinum blonde bob.

When told (by Harvey Keitel, Reservoir Dogs, Pulp Fiction, The Piano) that everything she knows about her dead father is a lie, she sets out to find the truth and along the way seeks to recover a historical lost Pan-American treasure.

And when not a Hollywood movie set, Zeta-Jones spends time with her family including her husband, actor Michael Douglas, as seen above traveling with their two children.