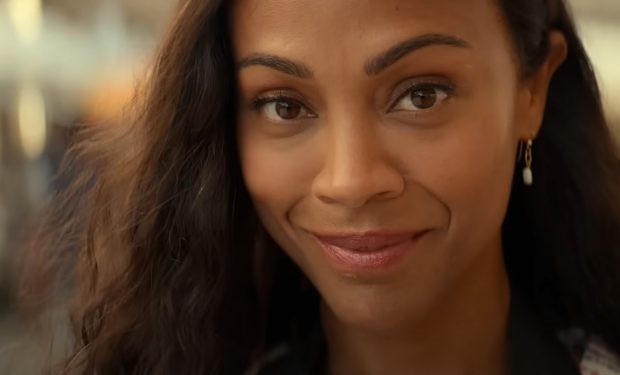 When not promoting the action adventure Avatar franchise, Saldana is often modeling. As seen above, she landed on the cover of Vogue Mexico, which she said she was “Over the moon” about and had been a “Big bucket item on my list of dreams.”

Saldana also landed on the cover of the American fashion magazine WWD (above). She cleverly captioned the photo series: “World Wide Dream come true.” The subtitle of the cover article ‘Zoe the Great’ is: “The mega star takes control as she gets set for the Avatar sequel.”

Swipe to see Saldana in a stunning gold cone bra corset similar to the one Madonna wore on her iconic ‘Blonde Ambition’ tour, among other provocative ensembles.

WWD reports: “Thirteen years after the original Avatar is back. Its star, Zoe Saldaña, has barely slowed down in the time since.”

Get ready to see more of Saldana and without blue pigment on her face: she currently stars in the Netflix romantic drama From Scratch set in Italy — trailer above.

Avatar: The Way of Water will be released in theaters on Friday, December 16.