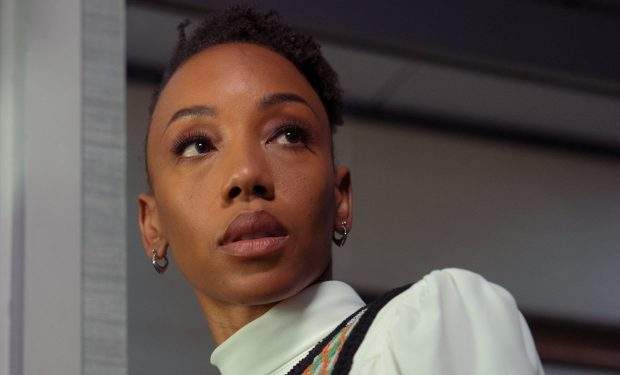 Eight months after slapping comedian Chris Rock on stage at the 94th Academy Awards ceremony, Hollywood movie star Will Smith is back in the public eye as he promotes his new film Emancipation. Smith stars as a runaway slave who “forges through the swamps of Louisiana on a tortuous journey to escape plantation owners that nearly killed him.” It is based on a true story.

Charmaine Bingwa plays the wife of Smith’s character. Americans will recognize the Zimbabwean/Australian actress from her role as Carmen Moyo on The Good Fight — see photos below from the set with co-star Christine Baranski.

Just four years ago, in 2018, Bingwa became the first person of color to be awarded the Heath Ledger Scholarship, which since 2008 has been presented to an emerging Australian actor “who demonstrates extraordinary ability and dedication to their craft and has international aspirations in their career and or training.”

The 2018 judging panel included Oscar-winner Matt Damon, Naomi Watts (above), Elizabeth Debicki, and Rose Byrne (below), among others.

Scholarship judge Elizabeth Debicki — who currently plays Princess Diana in Season 5 of the hit series The Crown — said: “in the end, Charmaine’s final audition, which showcased her raw and vivid talent, absolutely blew me and my fellow judges away.”

Get ready to see more of Bingwa: she will appear next on the big screen in Antoine Fuqua‘s (director of Emancipation) historical epic King Shaka, which is scheduled for a 2023 release.

Emancipation will be released in theaters on Friday, December 2 and available on Apple TV+ on December 9.