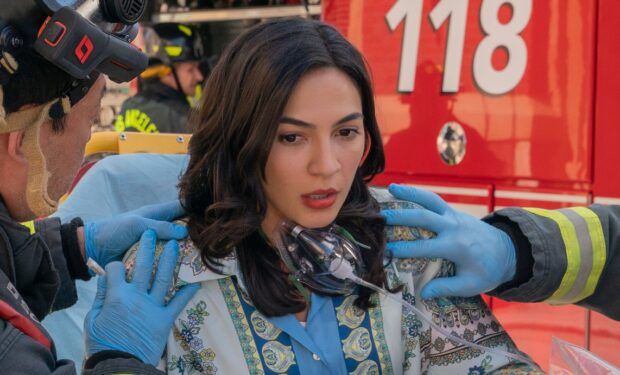 In the Season 6 episode of 9-1-1, ‘Cursed,’ LAPD Officer Athena (Angela Bassett) and the 118 race to the rescue when near-death experiences plague a fading movie star.

As seen in the (embellished) sneak peek video below, Natalee Linez guest stars as the woman who needs to be wheeled out of her home on a stretcher. She delivers the line: “A chandelier fell on me, doesn’t that sound like a curse?”

When not filming 9-1-1, Linez stars in the juicy hulu series Tell Me Lies (as Lydia, Stephen’s fiancee), and the Starz series Power Book III: Raising Kane (as Jessica, Famous’ older sister who moved from Baltimore to Queens).